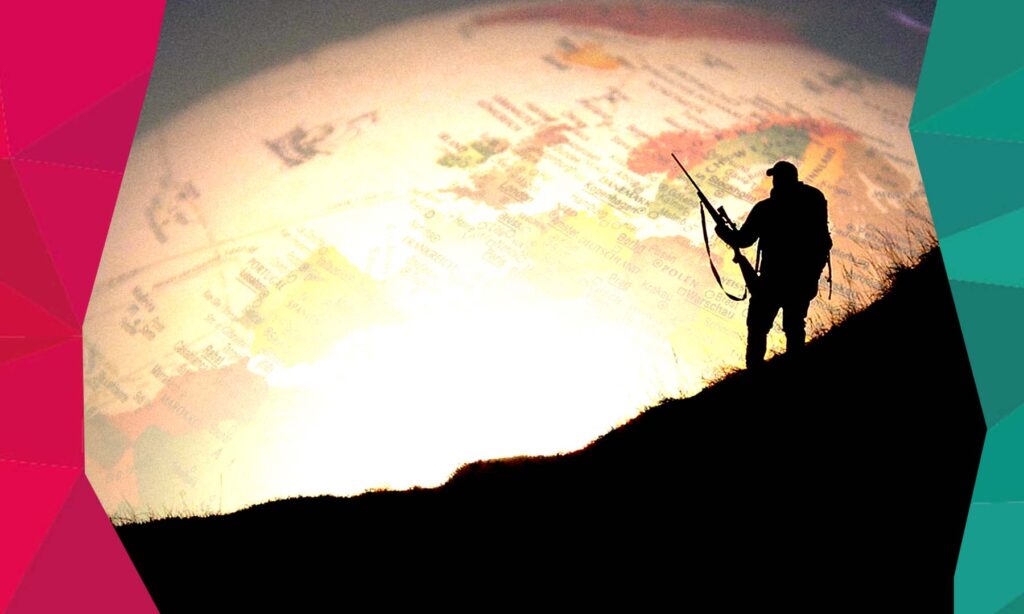 For years, India has been regarded as a cost centre for tech companies globally. Where Indian talent once came much cheaper than American and European talent — that is no longer the case. With 31 new unicorns (companies with a $1+ billion valuation) in just the first half of 2021, India is becoming the world’s fastest-growing start-up ecosystems.

But as more and more Indian companies storm to unicorn growth, it comes at a time in which they struggle to hire enough personnel, particularly in technology positions. Despite having one of the largest tech talent pools in the world (over 4.5 million engineers), most Indian companies are struggling to fill key positions as the demand for niche, new-age skills has multiplied in volume and value.

‘The talent gap in India is huge’

In just a year’s time, from June 2020 to June 2021, the hiring demand within the IT software and services sector has increased by a whopping 163%, according to data from India’s largest job search platform, Naukri JobSpeak.

“The talent here in India is simply getting more and more expensive.”

“The talent gap in India is huge”, Mayur Mahajan, Talent Discovery Specialist at RPO company TalentRupt, tells ToTalent. “Given the increase in demand of technical (Indian) talent all over the world due to the pandemic, the talent here in India is simply getting more and more expensive.”

‘Thinking of offshoring some work to a lower cost centre in SF, Bay Area’

Perhaps no statement illustrates the current tech hiring climate in India as clearly as a recent tweet by Bhavish Aggarwal, co-founder of Indian ride-sharing unicorn Ola Cabs. Prior to launching a new electric scooter, Aggarwal took to Twitter to describe an increasingly desperate hiring market. “Engineering hiring situation in Bengaluru. Thinking of offshoring some work to a lower cost centre in SF, Bay Area”, he tweeted. 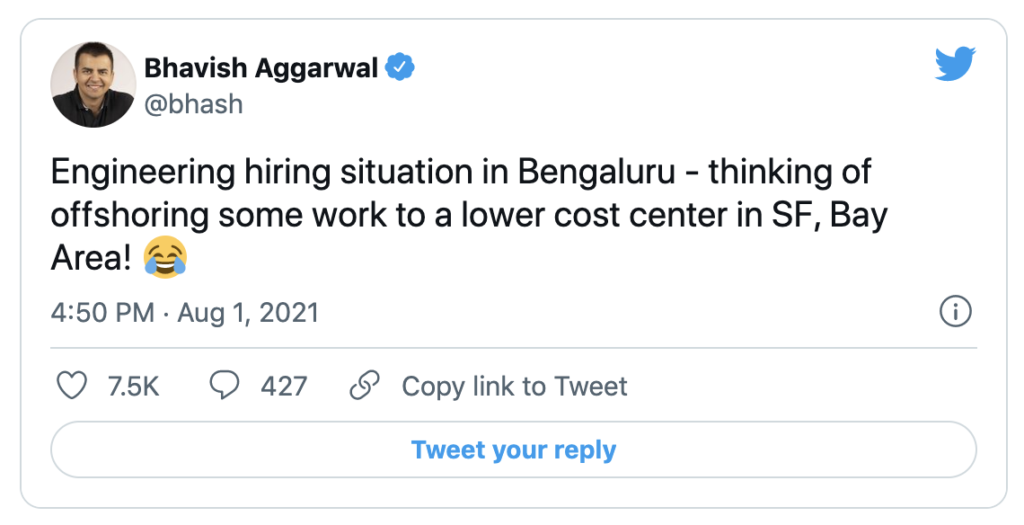 “The tweet was really meant to be a joke, with a sad underlying truth about the talent market in India”, Mahajan argues. “Recently, there have been talks by Tesla and other companies that the taxation structure in India leaves a less profitable margin for companies. What they meant was with ridiculous high tax brackets, mingled with costly talent, setting up shop is a very difficult and financially draining proposition.”

A matured market that has ‘exploded’

But the main problem revolves around talent, according to Mahajan. “The talent here is getting expensive because the existing talent is becoming more experienced, while the new talent seems to be half unemployable due to the lack of required skills”, he says.

“The current experience talent in Bangalore and everywhere else such as Pune and Ahmedabad is that they are so good at what they do, when they are approached by recruiters for a new job, their expectations are in the average bracket of 45 to 60 percent hike over and above other benefits and perks and incentives”, Mahajan says.

“There are so many opportunities for Indian talent, that it truly could be easier to find someone in San Francisco than in Bangalore.”

That sentiment was echoed by Sarang Brahme of Capgemini during the India-focused  episode of Hung Lee’s Recruiting Brainfood Live on Air. “Because of COVID, the Indian market has exploded. There are so many opportunities for Indian talent, that it truly could be easier to find someone in San Francisco than in Bangalore.”

The overshopping problem in India

Part of the problem is the tendency of Indian candidates and employees to overshop, according to Brahme. “When employees resign in India, there’s a three-month notice period”, he says. “Essentially, it gives candidates three months to shop around and see who’s giving them a better offer. And because of the current high demand, the amount of offers is increasing.”

“On the day they are supposed to join, it can truly be the case that that person has accepted a job elsewhere, and we need to start another search.”

“If I make a candidate an offer, they will typically be a good candidate”, Brahme continues. “Which tends to mean that they will have more offers in hand and have multiple options. Then, on the day they are supposed to join — I need to check if they are still interested in joining. It can come as a big shock to hiring managers because it can truly be the case that that person has simply accepted a job elsewhere, and we need to start another search.”

‘Candidates leave them high and dry’

Savita Hortikar, Head of TA at Thoughtworks, sees it as a real problem. “It makes for a market wherein you constantly have to keep the pipeline on. You have to keep engaging with candidates. You can’t just stop when you hire someone.” 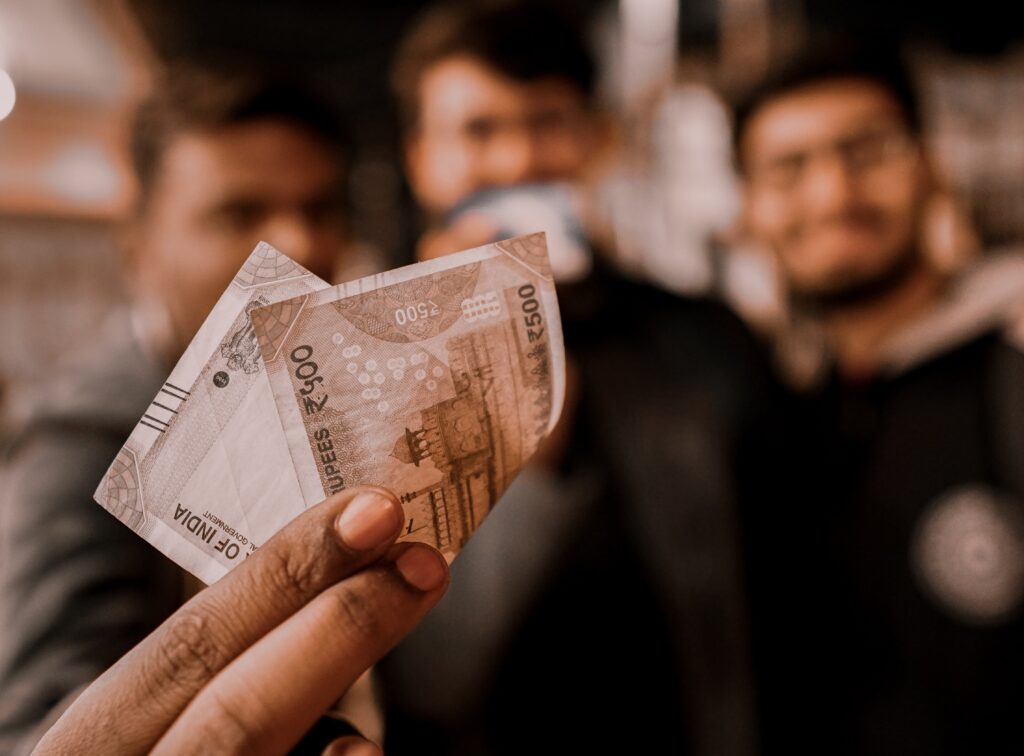 “Home-trained talent leaves them high and dry the moment they are offered more money elsewhere.”

According to Mahajan, the current situation puts a lot of strain on Indian companies. “They hire less qualified or fresh talent”, he says. “They train them, build them for the job. But then this very same talent leaves them high and dry the moment they are offered more money elsewhere.”

Europe as a hunting ground?

It makes for an interesting dilemma. Do Indian companies continue their pursuit of India-based, candidates who are getting tougher and tougher to hire, or would they perhaps be better off pursuing remote candidates in countries where costs could potentially be lower? With wages on the up, Indian companies have already begun looking elsewhere, according to Joseph Devasia of Global Executive Recruitment firm Antal India.

“Large IT service companies have recently started looking at Eastern Europe, Latin America and some in Africa as well.”

“Many Indian start-ups are now looking at Indonesia, Vietnam and Singapore as lower-cost alternatives”, Devasia says. “Whereas the large IT service companies have recently started looking at Eastern Europe, Latin America and some in Africa as well.” Devasia, however, doesn’t expect Western Europe to be a target anytime soon, due to higher costs.

“Europe can be a hunting ground, but is it ready to work for peanuts?”

Mahajan is a bit more hesitant about the prospect of Indian companies recruiting in Europe, but admits they may be forced to try. “Several peers and academic friends tell me that if Indian companies are looking towards Europe as a hunting ground for cheap, technical labour — they’ll need to up their game as they will face stiff competition”, he says. “Europe can be a hunting ground, but is it ready to work for peanuts?”

Why this bogus resume experiment shows that big-name work experie...