23-year-old research by retired University of Iowa professor Frank L. Schmidt illustrates that resumes don’t predict job performance. They are, in fact, filled with counterproductive data. His advice to talent leaders? “Pay attention to research findings and implement them”, he told ToTalent.eu. 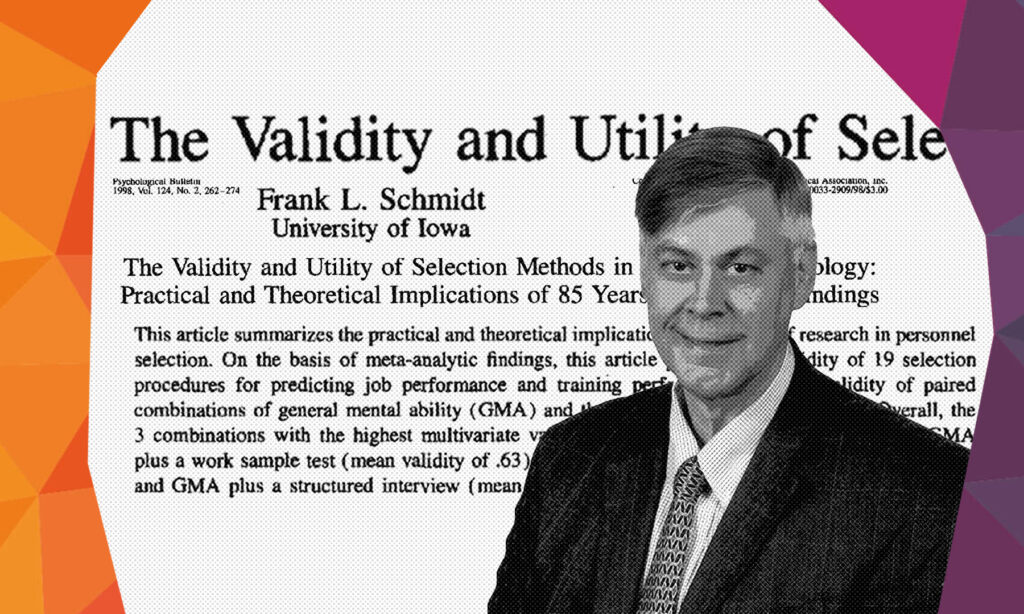 What predicts success? Is it a candidate’s marvellous peer ratings — or perhaps the number of years of work experience? Could it be age — or maybe his or her educational level? While these questions may come across as rhetoric, they’ve actually already been answered, roughly 23 years ago.

Formerly responsible for brightening minds at the University of Iowa about all things psychology — Frank L. Schmidt is now a 77-year-old retired professor. Prof. Schmidt spent much of his career researching the correlation between hiring practices and their why. His research, alongside Michigan State University’s John E. Hunter entitled The Validity and Utility of Selection Methods in Personnel Psychology was published in the Psychological Bulletin in September of 1998.

Based on several meta-analytic findings, it delved into a total of 19 selection methods that were used in the decision-making process in hiring, training and developmental assignments.

His research summarises the practical and theoretical implications of a whopping 85 years of research in personnel selection. Based on several meta-analytic findings, it delved into a total of 19 selection methods that were used in the decision-making process in hiring, training and developmental assignments.

The power of predictive validity

Predictive validity seeks to find correlations. Correlations between two variables: one typically being the score or scores on assessment tools and on job performance. Through these two data-points, you can sort of travel back in time — and look at what predicted success, and what didn’t. Based on the variability of job performance, you’re able to come up with, well, variables. Those variables run from 0 to 1. If the practical value of a predictive validity point is 0, then you’re essentially coming to the conclusion that you could’ve hired anyone, and they’d have performed the same.

We’ll save you the exact scientific calculations behind it for now — but Prof. Schmidt essentially took a number of personnel measures, and calculated its role in eventual job success. What it was able to conclude was fairly straightforward: age, interests, years of education and job experience all play a very tiny role when predicting the success of a hiring method, and thus the person it hires.

“These findings suggest that even under ideal circumstances, job experience at the start of a job will predict job performance only for the first 5 years on the job.”

Coincidentally, all of those data points usually reside on a candidate’s resume — therefore essentially rendering it useless when predicting job success. Even job experience, a frequently asked condition that scored much better than the other CV-related points, is essentially useless. “These findings suggest that even under ideal circumstances, job experience at the start of a job will predict job performance only for the first 5 years on the job”, as Prof. Schmidt put it in 1998.

While the research is very much able to identify the useless elements of talent acquisition — it is also able to look on the bright side. General Mental Ability (GMA) tests, work sample tests, integrity tests and structured employment interviews all ranked relatively high in terms of its predictive validity for job performance. It even delved into the power of combining two or three elements into one hiring practice. “It is really that simple”, Prof. Schmidt tells ToTalent.eu. “And you may not even need the Work Sample in some cases.”

“It is really as simple as combining elements. And you may not even need the Work Sample in some cases.”

Finally: the elephant in the room. If this piece of extensive research is 23 years old, why are those in recruitment and talent acquisition still making the mistake of taking resumes not only serious — but rendering them useful in real-life hiring practices? According to another piece of research, conducted by Sarah L. Rynes, Tamara L. Giluk and Kenneth G. Brown of the University of Iowa in 2007, it boils down to a gap between science and practice.

Their research asked a simple question: ‘How might managers receive information that is consistent with the best available scientific evidence about how various management practices influence business outcomes?’. When Prof. Schmidt’s research concluded that GMA tests were, in fact, the most common successful indicator of job performance — surely it would have been matched in terms of its coverage? The short answer is no.

“There is a clear gap in the extent of coverage of GMA between academic journals on one hand, and the practitioner and bridge periodicals on the other.”

“Despite the high degree of importance placed by research academics on the findings related to the intelligence-performance link, our search revealed almost no coverage of this topic in the three practitioner and bridge periodicals”, the research stated. “Thus, there is a clear gap in the extent of coverage of GMA between academic journals on one hand, and the practitioner and bridge periodicals on the other.”

And while 23 years is a long time — it’s clear that many organisations its talent leaders can still benefit from Prof. Schmidt’s findings. And the best news? It’s not too late to revamp strategies, based on the information out there. Prof. Schmidt’s conclusion and advice to those in the talent industry is, therefore, a simple one. “Pay attention to research findings and implement them”, he told ToTalent.eu.

Why the role of the manager has changed forever: ‘Focus must be...

How Jobs for Lebanon serves as a beacon of hope for a nation in e...