HomeNewsNewsThe standoff between Google for Jobs and Indeed

The standoff between Google for Jobs and Indeed

If you’re a fan of Westerns, the highlight of your day is probably a good old Mexican standoff. According to Venkat Janapareddy on the Chad & Cheese podcast, Indeed and Google for Jobs are in the midst of one. But one might need the other more than the other way around. Who’s biting first? 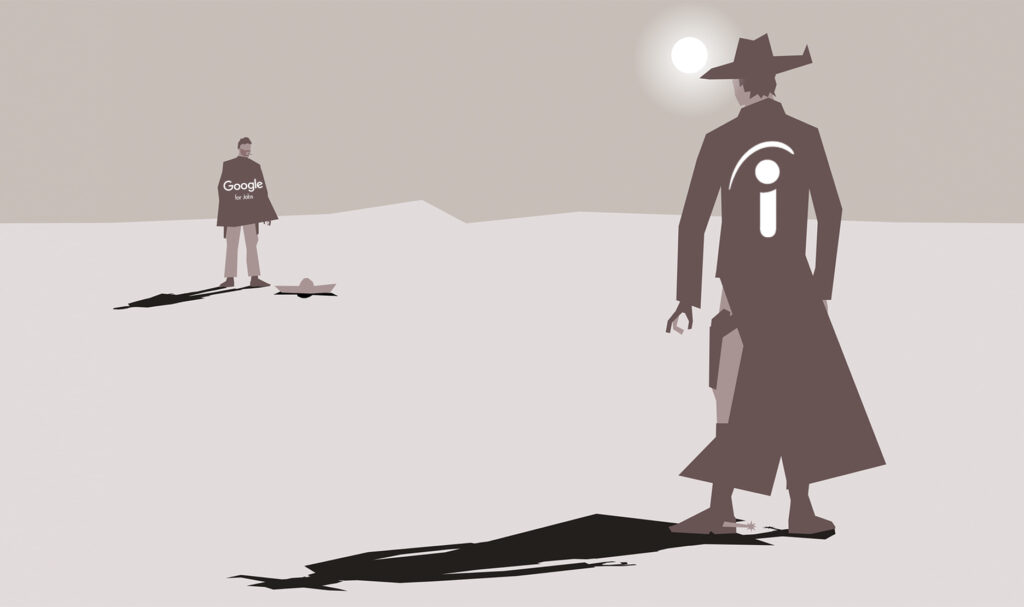 Of the 450 million visitors that find themselves on indeed.com, 40% is organic traffic coming through from Google. Meanwhile, according to Venkat Janapareddy, CEO of Jobiak, Google for Jobs’ visits are on the rise. “Based on Similarweb statistics, it started with 5%, last year it was around 20 to 30%, but now as it picks up (to 38%, red), Indeed is going to have a serious problem”, he says.

“Sites linking to you were basically votes saying you’re a good site.”

Much of Google’s overall success is directly attributable to their searches, external factors and back-linking. “It’s how Google became Google”, Joel Cheesman says. “Sites linking to you were basically votes saying you’re a good site. With Google for Jobs, maybe does having a good rating on Glassdoor, Indeed, or Careerbliss plays into ranking well on GfJ?”, he asks.

According to Janapareddy, the company reviews are now the equivalent to that for Google for Jobs. “If you look at the first available sales jobs on Google right now, page one is always jobs ads”, he says. “The first one is course Google for Jobs. The second one is Indeed, and then Ziprecruiters. They have all invested lots of money in SEO.”

Will Indeed jump on the bandwagon?

Now the landscape is slowly shifting towards an organic-driven job search approach. An approach that may lead Indeed to fold – and start using Google for Jobs. “If I am looking for a Microsoft tech or sales job, you actually don’t see Indeed name or being the second one”, Janapareddy says. “You actually see those jobs. That’s where the biggest fear is. The details, the jobs are coming organically, then they’ll panic and they’ll have no choice but to work with Google for Jobs to stabilise the overall traffic.”

“In the US alone, Indeed has around 3.5 million jobs. If Indeed dumps them all on GfJ, Google is going to take a hit.”

What Janapareddy is referring to, is a standoff between the two. Google for Jobs has put a huge dent in Indeed’s traffic, which is at the core of their business: generating as much job traffic as possible. “In the US alone, Indeed has around 3.5 million jobs. If Indeed dumps them all on GfJ, Google is going to take a hit. Imagine you go to Google for Jobs, and every other jobs now says ‘apply on Indeed’. I think Indeed will jump on the bandwagon very soon. It’s going to be good for them.”

What will Google do?

Then it’s up to Google to respond. Joel Cheesman expects Google to create a ‘apply through Google-button’, which companies can voluntarily insert in their job postings. “Now you can find the ad, but to be able to apply, you still have to go to a different website. I’d rather just click my apply with Google, and be done with it.”

“When it was announced in 2017, I thought three, four years from now, they just don’t want job seekers to leave Google.”

It’s exactly what Janapareddy thought was Google’s idea when GfJ was first launched. “When it was announced in 2017, I thought three, four years from now, they just don’t want job seekers to leave Google. Just find the job, enter your resume through Gmail, click apply – and you’re done.” But that clearly hasn’t happened. Nor is much happening at all with the platform lately. That, according to Janapareddy, is due to the antitrust issues going on in Europe.

“I think the antitrust situation in Europe is one of the reasons they have slowed down a little bit.”

“The European Commission sent a letter to Google, asking them: ‘Why do you show up first?’. Even in the travel branche, everyone is depending on coming first. For years, companies have worked under their guidelines, following SEO, investing millions – they should be able to come first. It’s interesting to see what’s going to come out of this antitrust situation in Europe. I think that’s one of the reasons they have slowed down a little bit.”