HomeNewsLeadershipCreating diverse leaders: “If it is to be, it is up to me”

Creating diverse leaders: “If it is to be, it is up to me”

When the Tampa Bay Buccaneers won the Super Bowl just a few weeks ago, superstar quarterback Tom Brady took up most of the headlines. And while his post-game avocado tequilas were well-deserved, not many people know the victory came as a result of one of the most inclusive and diverse coaching staffs ever.

Bruce Arians can be called anything but a fast riser. It took the newly-crowned Super Bowl winning coach a grand total of 24 years of coaching in the NFL before he was finally appointed head coach. While it took Arians close to a silver jubilee, for some coaches that opportunity simply never comes. Bluntly put: for some Black, Asian and minority ethnic (BAME) coaches that opportunity never comes.

Currently, the NFL has 4 head coaches (of a total of 32) from a BAME background, while over 65% of its players are African Americans.

When the National Football League first introduced ‘The Rooney Rule’ in 2002, it required professional teams to interview at least one ethnic-minority candidate for senior positions. The rule was introduced at a time when two African American coaches were fired, let’s say, quite unfairly. Currently, the NFL has 4 head coaches (of a total of 32) from a BAME background, while over 65% of its players are African Americans.

It’s not just an NFL problem, however — in our last data research we took the seven top divisions of European football — soccer — and found that only 2.21% of all managers can be considered BAME. The English Premier League, the German Bundesliga, the Dutch Eredivisie, the Italian Serie A, and the Spanish LaLiga combined for a grand total of zero black managers.

Back to Arians. While his rise to the highest coaching position in the NFL was anything but fast — when he got there, he made sure to do it his way. He coached for five years with the Arizona Cardinals, becoming one of the most popular coaches the franchise had ever had. Arians then retired in 2017, before the Bucs lured him out of retirement two years later. Now aged 67, Arians was getting ready for a last hurrah in the game he dedicated his life to. 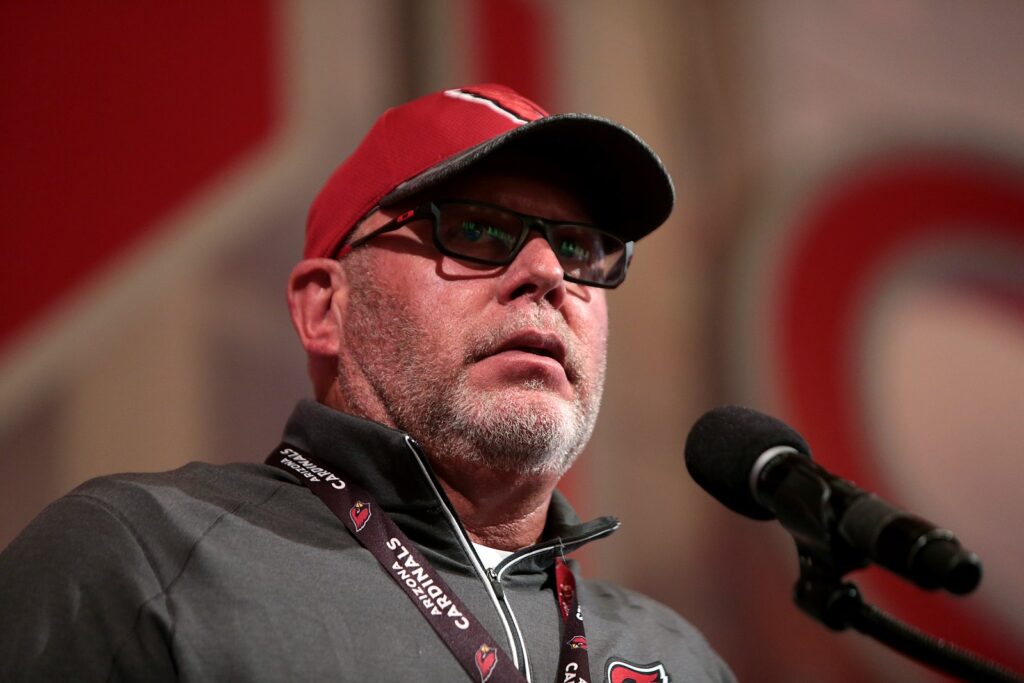 “My philosophy is to create head coaches. You identify them, and kind of raise them to push them onto other opportunities.”

Any manager is as good as his (or her) best assistants — a statement that holds true particularly in the realms of American Football. You can’t lead a sports franchise — or business — to greatness if the people working for you aren’t aiming for the same exact thing. In Arians’ case, he was given complete freedom by the Bucs to amass the staff he wanted. “I had a long pool of guys that I worked with”, he told Sports Illustrated before the 2020 season. “My job is to create head coaches. You identify them, and kind of raise them to push them onto other opportunities.”

So Arians made his hires. He made former quarterback Byron Leftwich his Offensive Coordinator, he made Todd Bowles his Defensive Coordinator, Keith Armstrong was put in charge of Special Teams while Harold Goodwin was appointed Assistant Head Coach. Now, those four names might not mean anything to you if you’re not a casual follower of the NFL. But with those four hires, Bruce Arians made the Bucs the only team with four African Americans in its most important coaching positions. 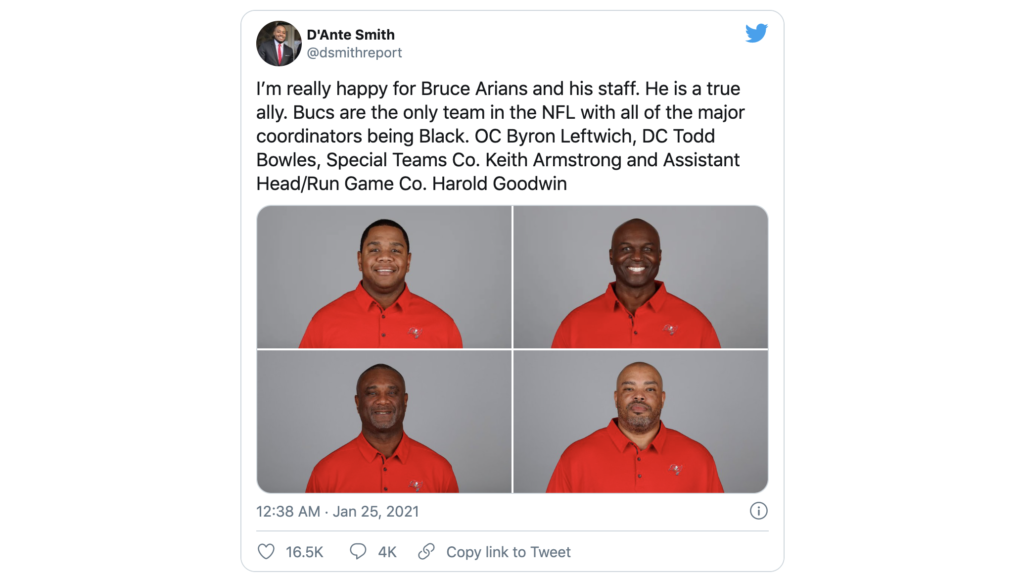 Bruce Arians made the Bucs the only team with four African Americans in its most important coaching positions.

And the diversity doesn’t stop there. The Bucs also hired two female coaches, Maral Javadafir and Lori Locust, onto their staff as full-time coaches. With that, they became the first to team to have women as full-time coaches. If you ask Arians — he’ll simply state he hired the best available staff available to him. He won’t really take credit, and therein lies the humble nature of the 68-year-old Super Bowl winning coach.

Five two letter words combine for the most powerful sentence in the world: ‘If it is to be, it is up to me.’

A keen motivator, Arians often uses a quote while he addresses his players and staff. “Five two letter words combine for the most powerful sentence in the world: “If it is to be, it is up to me.” Though Arians uses it to demand a certain type of attention to detail from his players and coaches — he may as well be talking about the ever-existent elephant in the room: the sincere lack of diversity at the leadership level in all walks of life.

While NFL playbooks tend to be colossal things, perhaps we can all take a page out of Arians’ book and say: if is to be, it is up to us.

Want to know more about diversity?

Are you ready to change the world? Amidst a widespread need and desire for company-wide diversity, will you take on a leading role for Diversity Recruitment? Find out how at ToTalent Live 2021.  On March 23rd, 24th and 25th, we’re hosting the first ever European Recruitment Leadership Event. Tickets for this virtual event are FREE. Sign up now. 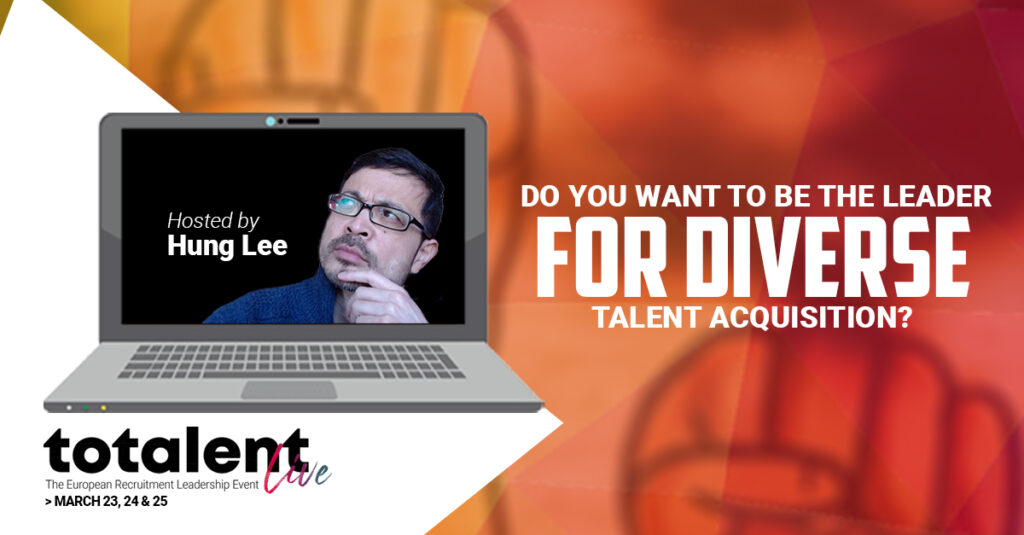 How to optimise your remote teams’ quality of life at work

Creating diverse leaders: “If it is to be, it is up to me”

With burnouts at an all-time high, how do you lead your team?